A 308-Year-Old City Shows its Resilience 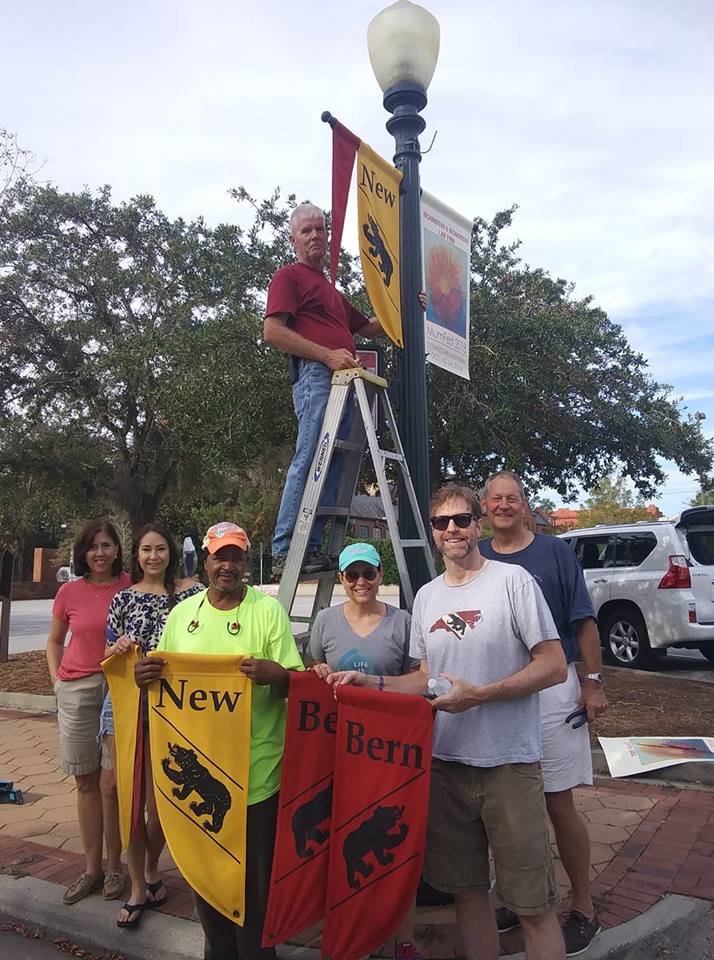 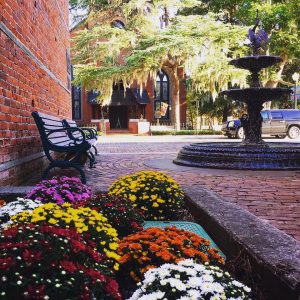 Not long after it was a mere tropical wave over western Africa on Aug. 30, future Hurricane Florence’s course was set. Never straying far from its east-by-northeast path, Florence headed straight for North Carolina, strengthening as it went. It began its assault on the coast around Sept. 11 and unleashed its full fury over the next two days. Then it loitered, drenching the state for a full week and subjecting nearly the entire state to its effects.

Though many communities were devastated, early on, it seemed all eyes were turned to New Bern.

New Bern, founded in 1710 and the second oldest city in the state, has weathered a lot of hurricanes over the centuries, but Florence was one for the history books. The city, which sits at the confluence of the Neuse and Trent rivers 35 miles by boat from the Atlantic Ocean, had not seen such devastation since 1955’s Hurricane Ione, a hurricane so bad its name was retired.

Florence sent a 6-foot storm surge up the Neuse River that for a time merged with New Bern’s low-lying edges. Coupled with tropical storm-strength wind and rain, it was a trifecta that pummeled the city and surrounding riverfront communities.

Flooding reached several blocks inland. Power outages affected nearly all the city’s 30,000 residents. Many homes and businesses near the river were destroyed while all the others were flooded.

Among businesses, entire inventories were destroyed. Without refrigeration, restaurants and food stores lost tons of chilled and frozen foods. At one downtown sporting goods store, Surf, Wind and Fire, a second-floor roof collapsed and pancaked to the ground, leaving a gutted ruin of one-third of the business’ floor space.

Not even New Bern’s iconic bear statues were exempt. Some detached from their 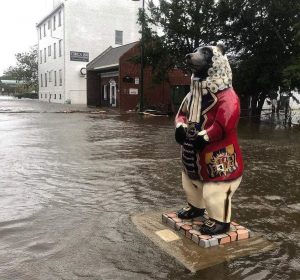 foundations and floated away, coming to rest on sidewalks and in the middle of streets once the flood subsided.

As soon as they were able, city officials, residents and business owners began their assessments. In all, Florence inflicted more than $100 million in damage to the city. President Donald Trump visited to view the damage for himself.

Federal and state emergency teams and hundreds of volunteers descended on the area to assist residents and business owners “muck and gut” their flood-damaged properties.

Throughout the downtown and neighborhoods near the Neuse and Trent rivers, property owners pulled out their damaged and contaminated goods and belongings, along with drenched drywall, plaster, wallpaper, rugs, carpets, furniture, insulation, and ductwork. The wreckage and debris formed piles 6 and 7 feet tall along sidewalks and beside streets.

The city-operated day marina at Union Point Park was destroyed and the Bridgepointe Marina was devastated, while other local marinas sustained varying degrees of damage.

But the biggest single blow was New Bern Riverfront Convention Center. Floodwaters intruded through broken windows and filled the interior with 3 feet of water and, according to accounts, one alligator.

The Convention Center opened in 2000 as the first major convention venue in Eastern North Carolina. It has been a huge draw to a downtown that is already a popular destination for tourists and conventions.

It is important to put something in context. New Bern is located near Marine Corps Air Station at Cherry Point, the largest Marine Corps air station on the East Coast. The base accounts for more than 49,000 active duty Marines, their families, civilian workers, and retirees. In comparison, the population of Craven County, where the base is located, is just over 100,000. That gives you some idea of Cherry Point’s significance to the community.

The Marine Corps was born in a tavern in Philadelphia on Nov. 10, 1775, and Marines celebrate the Nov. 10 birthday with elaborate balls. Riverfront Convention Center (as well as all other event venues within an hour’s drive of Cherry Point) is usually booked solid from mid-October to Nov. 10 with Marine Ball events. Hurricane Florence shut down downtown New Bern as a host to Marine Corps balls for 2018, and the financial impact of that will take months to tabulate. 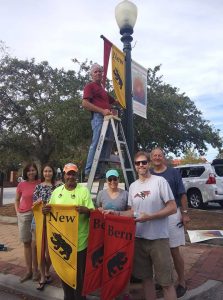 More pressing, however, was MumFest, the city’s largest festival and by far its largest downtown event. In 2017, MumFest drew 100,000 people to a two-block-by-three-block area of downtown. Although it was delayed by a month in 2016 by Hurricane Matthew, MumFest has always been held in mid-October and has never been canceled since it began in 1980. But in its 38-year history, MumFest never experienced something as devastating as Hurricane Florence. Then again, Hurricane Florence never experienced something as resilient as New Bern.

MumFest is a fund-raising event for Swiss Bear Downtown Development Corporation, which has steered the transformation of downtown New Bern from the shabby and half-empty eyesore in the late 1970s, to what is widely regarded as one of North Carolina’s crown jewels. Swiss Bear organizes and runs the event, but even Swiss Bear was affected by Florence. Its ground-floor offices off South Front Street were flooded, forcing its two-person operation to work remotely.

On Oct. 12-14, MumFest was held once again. Its kickoff concert featured Dan + Shay and was located at Lawson Creek Park, which—you guessed it—had also been devastated by Hurricane Florence. City of New Bern workers, helped by crews from surrounding cities and counties, were able to patch downtown New Bern and Lawson Creek Park back together just in time for MumFest 2018.

Swiss Bear provided free booth space to businesses that reside in New Bern’s Main Street footprint. Roughly 50 businesses accepted the offer. Danny Batten, the owner of Surf, Wind, and Fire, reported that his sales during MumFest were 60 percent higher than the previous year and that his revenues rivaled Black Friday, according to Swiss Bear Executive Director Lynne Harakal. 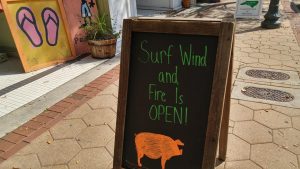 felt encouraged that business would turn around for Downtown,” she said.

Revenues for MumFest are projected to be slightly down this year, primarily due to several sponsors being unable to meet their pledges as a result of the hurricane. The overall number of paying vendors for the festival was on par with other years.

“I was told by many vendors that although their businesses were affected by the hurricane (specifically in Duplin, Onslow, and New Hanover counties), they were grateful MumFest was being held when so many other festivals had canceled,” Harakal said. “Some vendors did cancel due to the hurricane. About 25 vendors were unable to attend. However, we picked up some vendors at the last minute.” 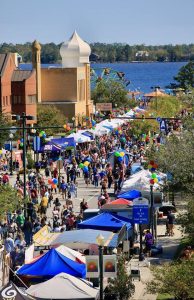 Attendance was at least on par with last year, maybe a bit stronger, Harakal said. “Our attendance estimate for this year is approximately 110,000.” Not bad for any year, much less just a month after a major hurricane.

Proceeds from the Dan + Shay concert, estimated at $80,000, will be put toward New Bern’s Hurricane Florence recovery effort.

Downtown New Bern continues to put itself back together. Most downtown hotels have reopened as renovations continue, and most stores and restaurants are back in business. But Riverfront Convention Center may not be ready for business until 2019, with officials there taking this as an opportunity to fix structural issues that have existed since the facility opened.

New Bern is not without functioning venues for events and meetings.

Sweet Treats to Beat the Summer Heat in New Bern

This site uses Akismet to reduce spam. Learn how your comment data is processed.